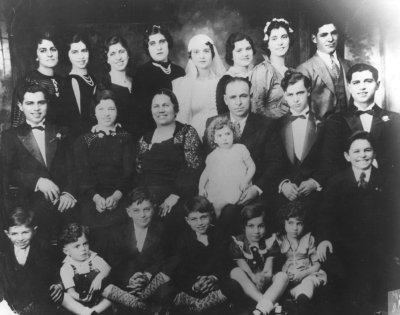 Michael Latoria left Italy with his family at the age of 14. Once in America, he headed right for Chicago, where he later met his wife, Rose. Around 1918, they moved to Franklin Park with their seven girls and three boys; ten more children were born after the family’s move to Franklin Park. Mr. Latoria worked for the Milwaukee Railroad and farmed, and truck farming and grain farming became the family business at several locations within Franklin Park. At times, the family owned up to five or six hundred acres of land. They lived in several locations, including the Kirchhoff home (10067 Franklin Ave.), before building their own home on Ernst St. in 1925. On August 19, 1950, the Latoria family was honored on the Chicago TV program “Saturday Night Party” for being the family with the largest number of living children.