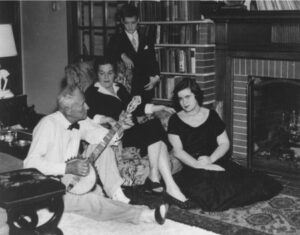 Born in 1878, Edgington Franklin was one of four children, and the eldest son, born to Lesser and Sarah Franklin. Edgington’s sister Dora was born in 1876, sister Pearl was born in 1880, sister Rose was born in 1883 and brother Gustave was born in 1884. He married Marcia Towle in 1917 or 1918. Marcia died around 1940, and, some time later, Edgington married Ruth Saladin. They moved to Easton, Maryland around 1950 and lived the remainder of their lives there. Edgington’s ashes were scattered at the “400 Farm” (what they called their farm in Easton, Maryland, because it was approximately 400 acres). Edgington was quite successful in real estate and helped his father (Lesser) a great deal after the crash of 1893.