Rodger Hammill was born August 30, 1915 at 2717 Clyborn, the same place his mother was born. The family moved to 4104 West Meade in 1923. Rodger attended grade school in unincorporated Norwood Township at Melvina and Montrose. The City of Chicago’s corporate limits at that time did not extend beyond Irving and Austin Blvd. Rodger fondly recalls visiting relatives on the west side of Harlem Ave., south of Irving Park Road. It was from there that he would often walk the old “Indian Boundary Line” west to the Des Plaines River. Following the river north and gathering arrowheads in the woods, he would eventually return to the city by walking along Irving Park Road. The original “Indian Boundary Line” by that time was a long ditch that would fill with water in the winter and spring. By summer the water was gone. The old abandoned railroad bed that once ran from Chicago through Dunning and terminated in Franklin Park would be visible. Rodger remembers vividly that in 1925 a terrible fire filled the sky and swept through the Dunning grounds, destroying nearly all the buildings and killing hundreds of patients.

A much happier memory of Dunning occurred in 1930. That was when Rodger was introduced to Dorothy at an ice skating outing on a frozen pond there. After graduating high school at Carl Schurz, Dorothy and Rodger were married in 1940 in this same neighborhood at St. Pascal’s Church.

In 1942 the Hammills’ moved to Franklin Park. Rodger ran the Chicago Washed Cotton Goods Co., which he had inherited from his father. Running the family business kept Rodger continuously busy. However, he somehow still found time to sell electrical materials for the Bright Electric Co. Photography was a big interest of Rodger’s and during this time he took pictures for the police and fire departments.

By 1947, Rodger opened his first studio on Franklin Ave. In addition, he helped form the Chamber of Commerce, was appointed Police and Fire Commissioner and was elected Village Trustee.

Rodger’s name is synonymous with Kiwanis and he has a 53-year perfect attendance record. In 1946, Rodger campaigned for a water bond issue to bring Chicago water to town. In 1948, he became a founding member of the Franklin Park Manufacturing Association, In 1953, Rodger, along with many Franklin Parkers tried to have a hospital built in town and was a charter member of the Leyden Hospital Foundation. In 1957, he was elected Leyden Township Constable and in 1959 was appointed Civil Defense Director of Franklin Park.

Rodger’s incredible photograph collection of Franklin Park’s history served him well for the 70th anniversary held in 1962, the 1967 Diamond Jubilee, and the 1992 Centennial. Rodger was intimately involved with all three historic town observances providing photos, movies, documentary and hundreds of hours of his time to make these events so memorable. 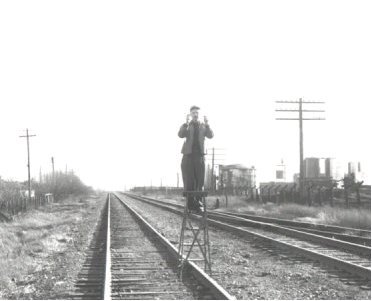 During this entire period, Rodger has been an active member of the First United Methodist Church, photographing all events there, especially the yearly confirmation classes. Rodger has also been a life long friend of the library. He helped to create the Village Library District in 1967 and continues to provide pictures to the local history room.

Rodger’s awards are too numerous to list. However, the testimonial dinner by local police, fire and village officials in 1978, Individual of the Year by the Chamber of Commerce in 1985, Senior Volunteer by Cook County Sheriff, Michael Sheehan and the Kiwanis Amador Medal in 1997 stand out as some of the most memorable.

Rodger’s presence has made a difference to Franklin Park. His efforts and contributions over the past 59 years have left a profound and lasting legacy.

Above text written by Village President Dan Pritchett and taken from the booklet prepared for the Rodger Hammill Salute, February 2001.

View some photos taken at the Hammill Salute!