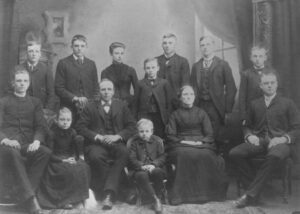 Henry Kirchhoff was born in Bennevos, Germany in 1835. The son of Henry and Christine Kirchhoff, he came to the United States in 1846. In 1861 he married Anna Maria Franzen (of Manheim, IL), with whom he had twelve children. Henry Kirchhoff lived at the home of his parents until he was 25, and then went on to cultivate 240 acres of land. He originally purchased land from the Agricultural College, and later purchased another 80 adjoining acres from his father. In 1873, he erected a beautiful two-story brick residence which is still standing at 10067 Franklin Ave.

Mr. Kirchhoff was a Highway Commissioner for 10 years and a School Director for 15 years. He allowed passage of the Chicago and Pacific Railroad (Milwaukee Railroad) though his land with the stipulation that there would always remain a train depot to serve the people who reside in the Manheim Area.