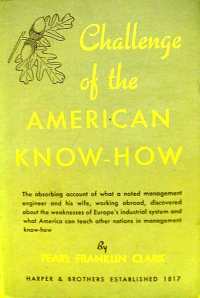 Pearl (Franklin) Clark was the third of five children born to Lesser and Sarah Franklin. She was born in Bedford, Iowa, in 1880, and her sister Dora was born in 1876, brother Edgington in 1878, sister Rose in 1883, and brother Gustave in 1884. When Pearl was 4 years old, the family moved to Minneapolis, MN. A few years later, in 1887, they moved to Chicago, IL and again in 1891, to Franklin Park. Pearl first married Harry C. Godfrey, who was involved in electrical work, in Franklin Park, but their marriage ended in divorce. In 1920, Pearl entered the international management consulting firm of Wallace and Co. as a partner.

In 1922, Pearl married (Henry) Wallace Clark. After his death in 1948, Pearl became sole owner of the firm, and in 1952 she retired. She was a member of various organizations and societies (for example: the Society of Women Engineers and League of Women Voters). Among her other accomplishments, she wrote Challenge of the American Know-How and co-wrote the play, “Young America.”