Lesser Franklin was born in Germany, but no complete record of his early life there or in the United States is available. He arrived at New York in a small sailboat from Germany with a group of other adventurous youngsters like himself, and was faced with the task of supporting himself and learning a new language.

Franklin worked westward with the wagon trains and new settlers, earning money and saving most of it. When he had saved enough, he bought a team of horses and a covered wagon, stocked it with assorted merchandise that would appeal to settlers and followed land-seekers as a they moved to the open country in the west. He was a good salesman and made his business a success — so good that he added another store-on-wheels to his outfit, then another, and finally set up headquarters at Platteville in southwest Iowa, built a home, married Sarah Elizabeth King and started to raise a family.

Later he moved to Bedford, Iowa where he engaged in the land business along with his mobile stores. He felt that land was basic, as it offered home sites as well as a living. As settlers increased, settlements followed and permanent stores were established with larger stocks of merchandise that eventually succeeded the mobile stores.

In the late seventies, he moved his family to Minneapolis, opened a general store and also engaged in the sale of land. But as settlers increased, the environment changed as he saw bigger opportunities for himself in the larger cities well located on railroads and main highways. So, in the late eighties, he moved his family to Chicago where he opened a general store and became active in the sale of real estate (lots for home sites rather than acres for farm sites). Business was good, and he sold his store and devoted his time to real estate. 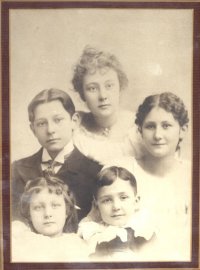 He subdivided forty acres, about ten miles northwest on the Milwaukee Railroad, into home sites and sold them quickly. Next came one hundred acres in the southwest (Beverly Hills area) – another sellout. Then four hundred acres about 15 miles northwest on the Milwaukee Railroad where it crossed the old Wisconsin Central Railway just west of the Des Plaines River and on the crossroads of two main highways. This was big enough to be called a town site, and he named it Franklin Park. Now he became both a subdivider and builder. He built and stocked several stores, which later were sold, a barber shop, Post Office, depots on both railroads, schoolhouse, hotel with dining room and bar, a large pavilion with stage for entertainment, meetings, dances and other public use. A large factory was built for a manufacturer of breakfast cereals. Another company, an iron foundry, was provided with free land on which to build a new plant.

Franklin built a ten-room home with every convenience than available for his family and used it as a showplace in sales work. A stable housed two buggy horses, a saddle horse, a pony and a milk cow. A large garden and landscaping including two arbors covered with grapevines, a summer house with gymnasium and three-room playhouse for the children. Other smaller homes were built and sold.

His sales methods were unique at the time. They included weekend excursions, with free tickets, on the two railroads, free barbecue eats and entertainment: bands, balloon ascensions, games and races with prizes. Salesmen in Prince Albert coats and silk hats to serve lot buyers – $10 down and $10 a month. Lots were also sold at a bandstand by auction. This took place during the early “good-times nineties” – World’s Fair Time.

Later in the nineties, when hard times hit the country, tight money and scarce jobs allowed the activity, but the town was old enough to go no further on its own because of its good location and other advantages. He continued with his work, but at a much slower pace.

His wife died in 1909, and he followed her in 1910. At the time of his death, he was working on plans for a new town site in Michigan. Always a leader – never a quitter.