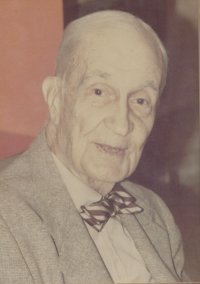 Gustave King Franklin, the second son of Lesser and Sarah Franklin, was born in 1884 — the only Franklin child that was born in Minneapolis, MN. The rest of the Franklin children were born in Beford, IA. Gustave’s brother Edgington was born in 1878, his sister Dora in 1876, his sister Rose in 1883 and sister Pearl in 1880. When he was about three years old, his family moved to Chicago. In 1891 they moved again, this time to Franklin Park.

Gustave King’s father Lesser was engaged in real estate development, and built a beautiful, spacious, well-plannned home for his family. G.K. (as he was often known) grew up in this home. G.K. never married. He served many years in the U.S. Army Ordnance Reserve, and achieved the rank of Colonel. G.K. was self-employed, living and working in Chicago his whole adult life. He always had a keen interest in Franklin Park. G.K. was a member of the American Legion, Masonic Order (33rd degree), and was a staunch supporter of the Colonel’s Drum and Bugle Corps. and Franklin Park Public Library.