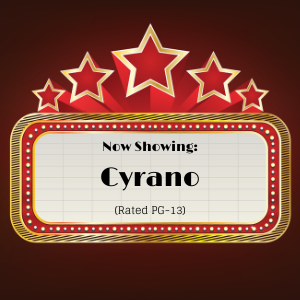 Join us each month to watch a newly released movie! This month’s movie is Cyrano (PG-13):

Nobleman, military man, and poet Cyrano de Bergerac is secretly in love with Roxanne. However, his insecurity over his dwarf stature prevents him from professing his love, especially when Roxanne confesses that she’s interested in Christian, a recruit. Elated that Roxanne would like a guy like him, Christian feels anxious about speaking to her. Cyrano agrees to ghostwrite love letters for him.