The Library is thrilled to accept an artwork donation from long-time Franklin Park resident and award-winning artist Sandra Reibscheid. Her oil painting, entitled “Nora and Nadia,” depicts a mother and daughter reading together. The painting was on display at the Library in March 2006, and now it will be displayed in Kids Crossing for all to enjoy. 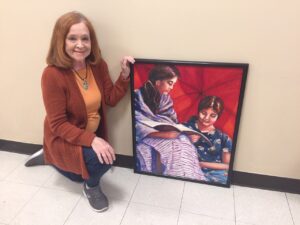 Sandra Reibscheid has been a resident in Franklin Park since 1993 and taught dance for both the Franklin Park and Westdale Park districts from 1993-2000. She is a watercolor and oil artist, wife, mother, and retired dance instructor. After 10 years as an actress in professional theatre, then 2 1/2 years designing window and store displays, she started studying art. With a B.A. from Michigan State University, she also studied at the American Academy of Art, and with noted artist Pat Olsen in Chicago.

Sandra’s work has been seen in exhibits in Chicago, Evanston, Arlington Heights, Wilmette, St. Charles, and in Oak Park, Illinois, as well as Flint, Michigan and Littleton, Colorado. She is an award winner and member of the Illinois Watercolor Society, Oak Park Art League (where she won the Best of Show Award-2001), a Vice President of the Chicago Society of Artists, merit award winner in the 1996 AFL-CIO Union Images Exhibition, and was also a finalist three times in the prestigious Baer Art Competition which included artists from Milwaukee, Wisconsin and Gary, Indiana as well as the Chicago vicinity. She has won first place in the Chicago Society of Artists Calendar Competition six times. Sandra’s museum credits include oil paintings in the Sloan Museum and Flint School of Music in Flint, MI., the Vanderpole Museum and the S.B. Friedman Collection in Chicago, and the AFL-CIO Collection.